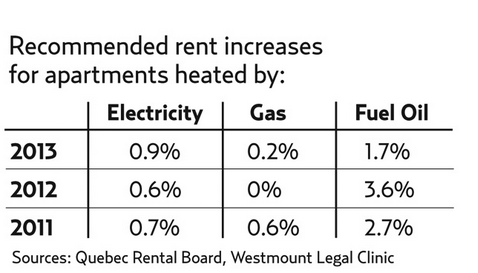 Read this piece yesterday in the Montreal Gazette. The province’s Régie du logement du Québec announced proposed rent hikes for 2013 on January 25th, and the ire of both landlords and tenants was clear in about 3 seconds after the announcement was made. This is the thing though, the province’s proposal for rent increases are in fact just meant as guidelines – a starting point if you will. Actual rent increases are negotiated between landlords and tenants. The province’s press release even states – “it’s meant as a starting point in the discussion of how much the rent will increase“. In other words, they just give their two cents on where they think the talking point should begin. Ultimately, landlords and tenants have to hash it out.

The Association des Propriétaires du Québec, blasted the suggested hikes as inadequate. Anti-poverty group FRAPRU said the hikes were too high, pointing out that the number of cases filed against tenants for not paying their rent hit a record in fiscal 2011-2012, rising 3.2 per cent to 47,049, compared to the previous year. Something else to note here – the vacancy rate has crept up in Greater Montreal from 2.5 to 2.8 per cent according to the Canada Mortgage and Housing Corp.

What do you think? Are you a landlord in Quebec? What are your thoughts on how the system works for you? Share your stories with us.