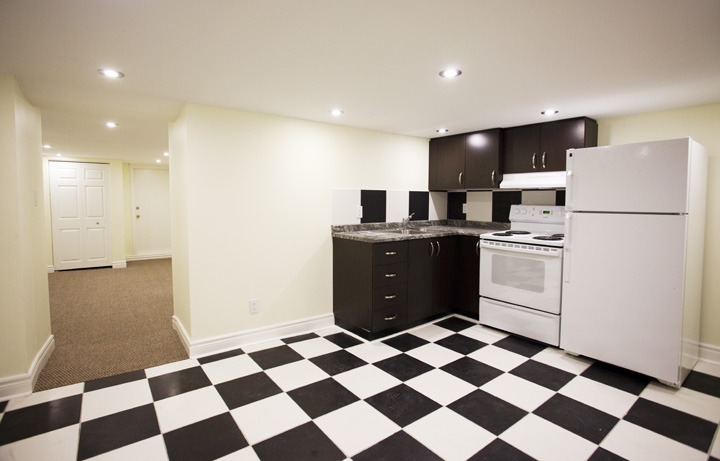 Well….it’s done. 3 months, $33,000 later, and about 700 views on this video – the basement apartment from hell has been transformed. Check out the gallery of before – midway – and after images I’ve included here. You can also reference the previous posts here, here, and here about the whole process.

The budget doubled – namely because of some essential items that needed attention. Things like surprises that were found behind drywall (critical masonry and waterproofing that was needed), a required visit from a structural engineer, and a complete rewiring (including the removal of a fair amount of knob and tube electrical). In an effort to create an accurate characterization of this project, these things increased the budget on what was more in line of a common spruce up, and don’t reflect the requirement of any other unit except mine.

The place was a complete mess before – so I’m viewing this as a key investment bringing a unit up to operational cruise control for a while. Considering I was getting $450 a month for an apartment that was technically suppressing the value of the house considerably (something the appraiser told me prior to buying the building), and which was renting for below market average for the area, the fact that this renovation cost more than I was anticipating doesn’t really bother me. Here’s a quick recap of what was done.

I was getting $450 a month. I’m aiming for $749 a month now, and just put up the listing. Couple of interesting things post renovation. The unit was originally a badly laid out 1 bedroom apartment. After doing all the work, and actually adding about 15 square feet to the place, I decided it was a better bachelor/studio unit, and I’m going to market it as such. Technically – the definition of a 1 bedroom apartment includes a separate and distinct living and bedroom area. In most cases, it also includes a door separating the bedroom. I feel a lot better about having a good sized and nicely put together bachelor unit than I did about a badly laid out and dingy 1 bedroom basement.

Looking at this as a long term exercise – and taking into account the increase in rent this will yield versus what I was getting before – without putting this down on paper – it will take me about 9 years to recoup the investment I made. This doesn’t take into account rent increases over that time or tenant turnover and a new set rent price. It also doesn’t take into account the value that’s been added to building (according to the appraiser I spoke with, it’s around $45,000). Lastly – it doesn’t take into account the reduction in operating attention I need to apply to the unit. All this to say, I’ve decided not to blow a gasket about how much this cost. From an operating perspective – I have a basement apartment that’s easier to market and rent now, and I’ll be earning an extra $3600 a year.

There’s a lesson I learned from this whole process. It’s essential to look at this as a long term thing. If you’re doing this – you might be inclined to finish it as quickly as possible, panic about budget, and neglect paying attention to details. You might also be inclined to jack up the rent unreasonably (especially after having not earned any money from the unit while you were doing the work) without doing some research on the rental market and taking into account the vacancy rate. Ottawa, a historically stable rental market and one of the best cities to be a landlord in – has experienced a significant increase in the vacancy rate. There’s way more selection. There’s also been a noticeable increase in landlords publishing astronomical and unrealistic rents post renovation to units. I don’t agree with this philosophy. Charging $1200 a month for a basement bachelor unit isn’t reasonable – even if you’ve spent $50,000 on fixing it up. You’ll just end up reducing the rent and getting desperate as you sit on a newly fixed up place in your search for a tenant – especially if it falls outside of the best times to rent an apartment. If I were to summarize the whole experience up – I’d give this advice…

Have you renovated a unit from top to bottom? Worked on a basement apartment? Share you stories with us. How did it go for you?