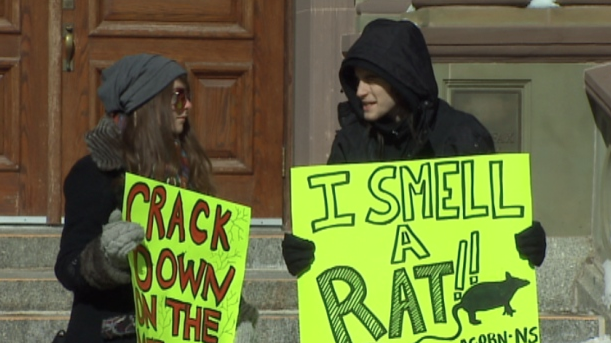 So…this happened in January. Halifax resident Devon Berquist had some house issues to return to after a short trip away. While those were being addressed, she claimed the landlord put her up in an equally issue ridden property. Between a posse of rats, frozen toilets, and mould, ACORN Canada ended up getting involved to represent the tenants, and the CBC ended up running a story on the whole thing. All of this ended up fuelling a protest outside of Halifax’s city hall, with about 40 tenants demanding the city do something about inhabitable living conditions in some of the city’s rental units while holding rubber effigies of rats to emphasize their point.

Councillor Jennifer Watts accepted a letter from the protesters on behalf of Halifax regional council. The council is awaiting a report from staff at the Halifax Regional Municipality, who have been asked to look at tightening restrictions on landlords.

“I think a licensing program would just make a difference, hopefully, in actually being more of a preventative action to really keep on top of what the quality and safety issues are within the existing housing stock,” Watts said, as protesters marched in the background.

Like many cities with sizeable student populations, Halifax sees a significant transient renter base. To boot – large-scale landlords own significant swaths of rental turf, and low-income renters such as students are either pushed to enclaves, or forced to live in substandard conditions.

“The real issue here is the Halifax Regional Municipality needs landlord licencing,” says Evan Coole, organizer with the Halifax-Dartmouth chapter of ACORN. “We have a minimum standards by-law, the M-100. It spells out all a landlord’s supposed to do [and] it’s really reasonable stuff.” Coole claims this is all fine and dandy, but the by-law doesn’t get enforced properly. Coole claims by-law inspectors do the minimum in the vast majority of cases, and nothing ever really gets resolved as it should.

In an effort to create a fair and accurate characterization of the situation as possible, and as reported by the media, Ms. Berquist’s lived in the initial house she rented for 2 1/2 years, which she described as “OK” – even though she cited peeling plasters and drafty windows as things that came with the turf. Upon her return to the house after the leak was fixed, she started setting traps and claims to have caught the 30 rats quoted in the initial piece by the CBC, which she claims was as a result of multiple holes in the foundation.

Here’s the update: The tenants ended up settling with the landlord, Wise Man Investments. Prior to the settlement, she claims mould and a rat infestation had forced her and her roommates out of the house earlier than their lease allowed. They were hoping to break their lease without financial repercussions.

Interestingly – the settlement, dated March 6 and mediated by Service Nova Scotia and Municipal Relations, does not mention the tenants’ original complaints of mould, poor maintenance or the rats they say they trapped in the house.

“We opted for the financial settlement to avoid further stress as the situation had already severely negatively affected many aspects of our lives,” Berquist said in an emailed statement to CBC News.

The settlement also included a signed apology from Berquist, retracting “any comments attributed to me and reported in the media or online that the Metleges are ‘slumlords.'”

She also apologized for “any harm to the reputation and character of my former landlord, Steven Metlege Sr., caused as a result of such comments.”

According to the settlement, both parties have agreed there will be no further claims against either party.

Wow. Is it just me, or is anyone else wondering what the hell is going on in Halifax? Thoughts? Comments? Share them here!